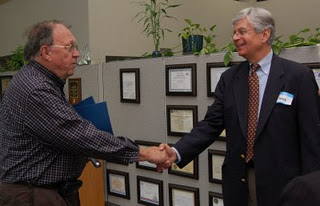 Rep. Seaquist, concerned with the economy and the impact on both low and middle income families, met with Hank Keaton, President of American Financial Solutions (AFS) and AFS staff to learn, first hand, about the impact of current economic stress on Washington residents. AFS, a nonprofit credit counseling agency in Bremerton, provided financial education and counseling on credit and housing issues to over 30,000 consumers in the last year.

“What are you hearing from Washington families and what do you see about their future as we work through the slowing economy?”, Seaquist asked. “Many of the people we talk with have little or no savings and carry significant credit card debt”, said Barbara Mascarin, Operations Director at AFS. “Then when the price of energy and groceries rose so dramatically, they couldn’t make their payments.” Representative Seaquist said, “About three blocks from here, I met a woman that said she had just started to use her 401k savings to buy groceries.” Mascarin added, “If their variable rate mortgage resets, they are pushed over the edge. We see this housing impact continuing to have a domino effect on family budgets for at least two more years.”

Trained and certified credit counselors empower callers with education, resources and tools to get control of their debt. Bob Denend, a certified credit counselor, explained, “Because of the downturn in the economy related to the housing and energy crisis, the disposable income just isn’t there anymore. Once a budget is put in front of people in black and white, they can see where they stand and quite often it’s not as bad as they perceive it to be. People need to know that they are not unique to this situation and that there is a solution. Often times it comes by doing several things, not just one.”

In response to increasing consumer debt and rising foreclosure filings within the State, AFS has added Pre‐Purchase Housing Counseling, Foreclosure Intervention and Assistance Counseling, and will soon add Bankruptcy Counseling to its existing services.

These are remedial services and Rep Seaquist agreed that real prevention lies in Financial Literacy training and that training should start in schools as early as possible. AFS provides free educational materials, workshops and classes on making the most of personal income, developing a budget, and managing credit and debt. More information about counseling services, money management courses and debt management programs are posted on the AFS website /.